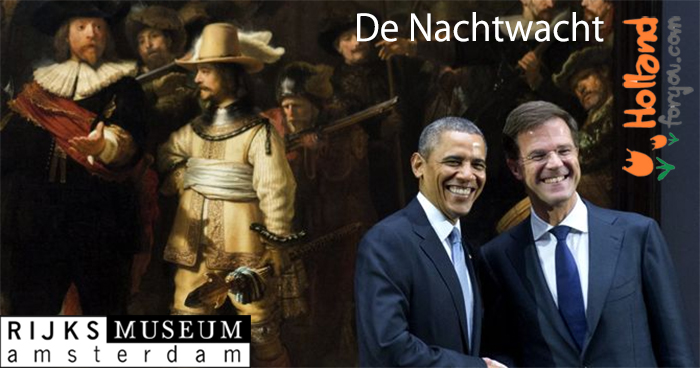 President Obama visits the Rijkmuseum in Amsterdam to see the famous paintings of our dutch artists like ; Rembrandt van Rijn, Johannes Vermeer, Jan Havicksz Steen. On this page we give some more information about our Famous dutch art.  Hopefully after reading more about Holland we hope that we have whetted your appetite. If you want a piece of holland directly you can order directly from hollandforyou.com

The white House :Summary of Obama's visit to Holland and rijks museum

Rembrandt van Rijn (1606-1669) Rembrandt was born in Leiden . As a miller's son After grammar school his parents wrote to him in 1620 at the university . Rembrandt dropped out soon off . He became an apprentice to a painter Jacob van Swanenburch in Leiden and then with Pieter Lastman in Amsterdam . Back in Leiden, he settled , with Jan Lievens , as an independent artist . At that time, Rembrandt painted many biblical scenes in a precise style with bright colors .

In 1631 he moved to Amsterdam , where he received many portrait commissions . Among his many pupils were Ferdinand Bol , Govert Flinck and Carel Fabritius . Rembrandt's own work in the light - dark contrast became stronger , the key loosen the dramatic compositions . In addition to portraits he painted historical paintings and etchings and drawings .

Rembrandt married Saskia Uylenburgh in 1634 . In 1641 their son Titus was born a year later Saskia died. Hendrickje Stoffels Rembrandt was in 1654 a daughter . He already had high debt and had to sell their home and possessions . He died in 1669 and was buried in the Westerkerk in Amsterdam .

Johannes Vermeer (1632-1675) Nowadays Johannes Vermeer is one of the most famous Dutch painters of the 17th century , but it was centuries of negligible . The small body of work that is now known of him , was attributed a long time to others . Only in the 70s of the 19th century he was rediscovered . Since then 35 paintings as ' Vermeer ' acknowledged. 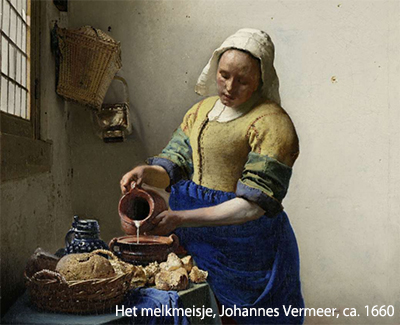 John was the son of a silk worker and has always lived and worked in Delft . Like his father, he was active in the art trade . Possibly he was a student of townsman Carel Fabritius . In 1653 Vermeer enrolled in the painters' guild , of which he was for several years head. Vermeer's early history paintings show the influence of the Utrecht Caravaggists . His later work includes interiors with one or a few people, mostly women . Intimate genre pieces , in which the protagonist is dedicated to everyday activity , usually in a window that lets in daylight . If no other Vermeer was the play of light on objects to display. The Rijksmuseum has three of its domestic scenes and a cityscape : the world famous Little Street .

Jan Havicksz. Steen (c. 1625-1679)
Jan Havicksz. Steen was born in Leiden, the son of a brewer. After the Latin School in 1646, he enrolled in the University of Leiden, but not concluded that he was apprenticed to a painter. Little is known about his training. According to 18th-century artists biographers he had as teachers Nicolaus Knüpfer, Adriaen van Ostade and Jan van Goyen. In 1648, Stone was like a master painter co-founder of the Leiden painters' guild, where he held various positions. He had a huge paintings production: mainly known genre pieces with merry companies, but Steen painted portraits and history paintings. To supplement his income to the painter in Delft ran a brewery and he later opened a tavern in his home. From biographies, he emerges as a profligate, but that idea is based more on his painted characters than on facts. Jan Steen is buried in the Pieterskerk. 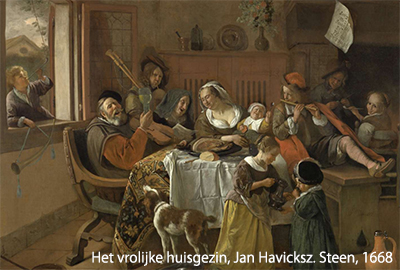 Vincent van Gogh (1853-1890) The son of a pastor, brought up in a religious and cultured atmosphere, Vincent was highly emotional and lacked self-confidence. Between 1860 and 1880, when he finally decided to become an artist, van Gogh had had two unsuitable and unhappy romances and had worked unsuccessfully as a clerk in a bookstore, an art salesman, and a preacher in the Borinage (a dreary mining district in Belgium), where he was dismissed for overzealousness. 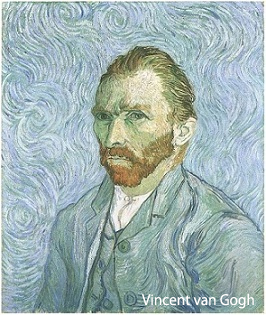 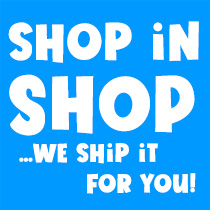 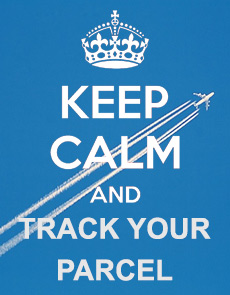